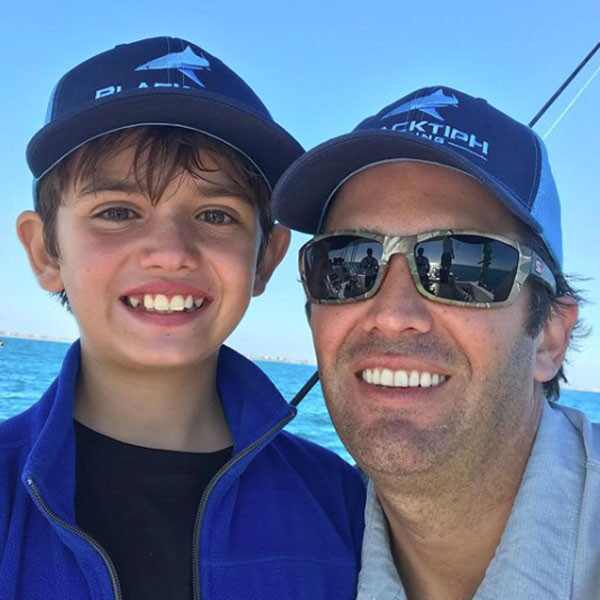 Some fun in the Florida sun may be just what the doctor ordered.

Just a day after his wife of 12 years Vanessa Trump filed for divorce, Donald Trump Jr. headed to his famous father, President Donald Trump's Palm Beach, Fla. resort, Mar-a-Lago, in honor of his kids' spring break. The 40-year-old businessman has been chronicling the trip on social media, sharing snapshots of his and Vanessa's five little ones, Kai, 10, Donald III, 9, Tristan, 6, Spencer, 5, and Chloe, 3.

So far, there's been a dad-daughter date for Donald and Kai followed by a fishing trip for he boys. "Out with the little man and some friends," Trump captioned a selfie of himself with son Donald III on Saturday morning.

Later on in the day, the kids turned a soccer game into an impromptu wrestling match.  "I'm not sure what happened but this degenerated very quickly. That said they're getting a workout at the start of their Spring Break so I guess it could be worse."

Just like her grandfather, 3-year-old Chloe got some practice in on the green. "Chloe getting after it @trumpgolfpalmbeach," Donald captioned a video of the little one taking a series of swings. "She's going to be a great player one day... also as cute as it gets."

The weekend was not over without a family fishing night. Chloe posed with their catch for the camera. "Chloe showing her brothers how to get it done tonight," Don Jr. captioned a photo of the toddler holding a fish.

"Spencer caught the big boy last nigh at family fishing nigh," Trump, Jr. captioned a snap of three of his little ones. "Good job little buddy."

It seems Don Jr. is staying close to family amid his split from his longtime wife. Despite what's transpiring between them privately, the estranged husband and wife have made it clear publicly that their focus is on their children moving forward.

"After 12 years of marriage, we have decided to go our separate ways," they said in a joint statement issued to E! News last week. "We will always have tremendous respect for each other and our families. We have five beautiful children together and they remain our top priority. We ask for your privacy during this time."