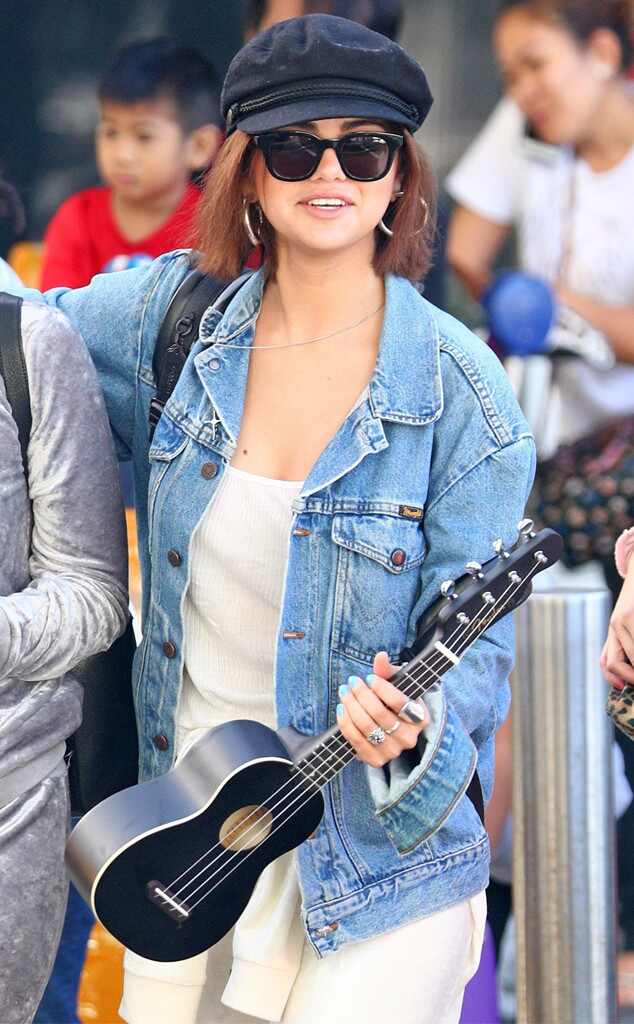 Selena Gomez is spending some time in the land Down Under.

The 25-year-old "Wolves" singer was spotted arriving at Sydney Airport in Sydney, Australia on Monday. Even after her long flight, Gomez looked chic. She wore white sweatpants, a white shirt and a jean jacket. She also accessorized her look with a cap and sunglasses, as well as a pair silver hoop earrings and white sneakers. In addition to bringing her travel fashion A-game, the singer brought a black ukulele.

Gomez didn't waste anytime enjoying some fun in the sun. The "It Ain't Me" singer was also spotted hanging out on a yacht with a few friends. She looked totally relaxed lounging in the sun with her book. She also cooled off with a quick dip in the Sydney Harbour.

However, the Biebs wasn't spotted with Gomez—fueling rumors that the two are giving each other some space.

The two rekindled their romance in November and spent a lot of quality time together. They even celebrated Valentine's Day together and were each other's dates for the wedding of Bieber's father. However, the two have been spending more time apart. For instance, Bieber attended the Mar. 15 premiere of Midnight Sun without Gomez and Gomez missed out on Bieber's 24th birthday celebration earlier this month. A source told E! News a "disagreement" around the "Sorry" singer's birthday celebration caused the two to take a "break." However, another source said the two are "still in contact and talking."

"They have cooled off on being together all the time and making it a big serious thing," the latter source said.

Still, dating in the limelight can be a strain for any couple.

"They had several disagreements on their lifestyle and how to handle their relationship in the public eye," the second source continued. "She really wants to keep things low key and out of the spotlight. Selena has been spending time with her family and her girlfriends. She is still going to church and keeping the lines open with Justin though. This is a more reset and a step back to reevaluate what's going on and what direction they want to go in."