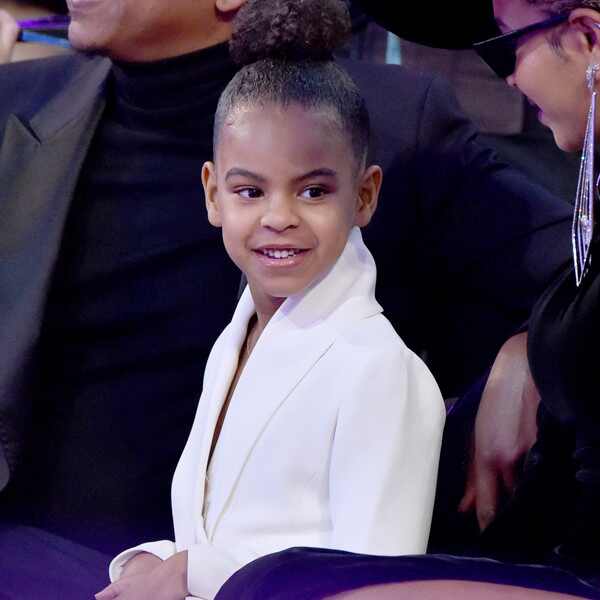 Show them the money!

Beyoncé and Jay-Z's 6-year-old daughter Blue Ivy Carter threw up bids at an art auction on Saturday...to the tune of $19,000.

The three attended the 2018 Wearable Art Gala in Los Angeles, organized by Bey's mom Tina Knowles and her husband Richard Lawson to raise money for a non-profit art and performance complex.

Blue Ivy initially bid $17,000 for an acrylic painting of a young Sidney Poitier. She then went higher at $19,000. After she raised her hand, Jay-Z jokingly tried to stop her from continuing to bid, drawing laughs. The moment was captured on camera and went viral on social media.

"Her mother and father have been talking about how you gather art and that is a big deal for African Americans," host Star Jones told the crowd. "Listen, you know Ms. Tina told me all of this. Why you think I'm up here talking about it?"

But Blue Ivy was not going to allow the Carters to go home empty handed. According to Vanity Fair, she bid on the next item, a 36" x 36" art piece made of deconstructed law and medical books California, and won with a final price $10,000.

The magazine said Beyoncé also made a winning bid of $17,000 on a set of Lorraine Schwartz panther earrings that she had previously worn to an event.

The theme of the gala was "Waco to Wakada," inspired by Black Panther.

Blue Ivy, who has showcased confident and sassy behavior in public before, and her mom attended the gala wearing elaborate gold dresses. The child also wore a gold wig.

Beyoncé was honored with the 2018 Waco Theater Humanitarian Award. She got emotional as she took the stage and was greeted by Hannah Brammer, a 17-year-old fan born with brittle bones who has occasionally met the singer at concerts.

I never thought people should receive awards like this because in my opinion, the giving is the reward and that's enough," Bey said, according to Vanity Fair. "I try to keep my charitable work quiet because I feel like these things should come from the goodness of your heart and nothing orchestrated as a campaign. And if I'm honored, I keep it quiet because I feel like I could be doing more."

"At a time where so many people are feeling afraid and looking inward, honey you give us the courage to reach out across every divide—race, class, gender, geography," she said, according to Vanity Fair. "It has been a joy to work with you on issues we care about and witness your outstanding work first hand. Because millions of girls around the world love you and admire you—including my daughters—it means even more that they see you standing up for others. I love you. I am inspired by you. I'm so honored and proud of everything that you have achieved and everything that you have contributed to our country and our world."

Jay-Z's mother Gloria Carter was given the Everyday People Award.

"She raised four kids and she did the best job with me," he said. "My mother is a beautiful human being. She's a progressive woman, who was always strong. She's someone who is so strong that she told me, 'You can do anything in life.' I believed it so much that I thought she made it up herself. I didn't realize it was a cliché, but I worked really hard because of her saying. I'm very happy and proud of you."